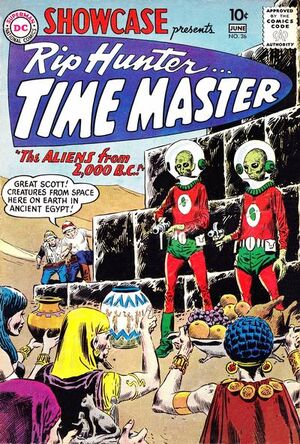 An egyptology professor asks for Rip's help in solving mysterious hieroglyphs showing the ancient egyptians worshipping unknown gods. With his fellow time masters tagging along, Rip takes the Tme Sphere into the year 2000 B.C., landing in the ancient Egypt village of El Karnak., where two alien beings from another world have been portraying themselves as gods and demanding tribute from the poor vilagers. Following the extraterrestrials to their island hideout, Rip finds that they are preparing for a global takeover using robot soldiers manufactured from a machine. He and Jeff destroy the robot-maker and rush back to the village to try and warn the people about the aliens and their remaining robots. The villagers at first don't believe them, but then a brilliant flash of light occurs and two more alien visitors appear. They explain that they are the law enforcement of their world, and that they came to recapture the two escaped criminals that made their way to Earth. It's at that time when the robots come into view! Rip notices a robot that has stopped working, and one of the alien criminals shooting a device at it to make it move again. This gives him an idea. Hurrying Jeff, Bonnie, and Corky back into the Time Sphere, Rip pilots the Sphere into a fast rotating spin, blowing the desert sand into the robots joints causing them to shut down. When all the robots are defeated in this way, the alien enforcers arrest their criminal brethren and beam them back aboard their ship. When Corky asks Rip how he figured out that the sand would affect the robots, he replies that the robot he saw go down was reactivated when the alien used a air-blower device to remove the sand from it's systems.

On the way back to their own time, Corky comments that maybe next time they can go see the future instead of the past, Rip tells him he'll think it over.

Retrieved from "https://heykidscomics.fandom.com/wiki/Showcase_Vol_1_26?oldid=1457658"
Community content is available under CC-BY-SA unless otherwise noted.