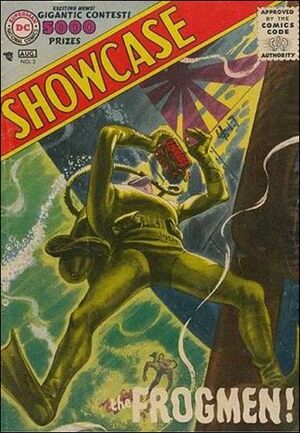 Doug had joined the Navy's Frogmen unit to prove himself, but his short stature has his teammates dubbing him "sardine". Though excelling during the training exercises, and saving one teammate from a vicious shark, he is still mocked for his diminutive size.

A mission to destroy an enemy cruiser is given to Doug's team. This may be his last chance to win the respect of his peers. When the enemy spots them and sends their own divers to chase them off, Doug swims ahead to attach the explosive device to the bottom of the boat while the others hold them off. The ship is destroyed, and Doug is given praise for his heroics by his team. They decide he needs a new name, since "sardine" is too small for a big hero.

Retrieved from "https://heykidscomics.fandom.com/wiki/Showcase_Vol_1_3?oldid=1457625"
Community content is available under CC-BY-SA unless otherwise noted.