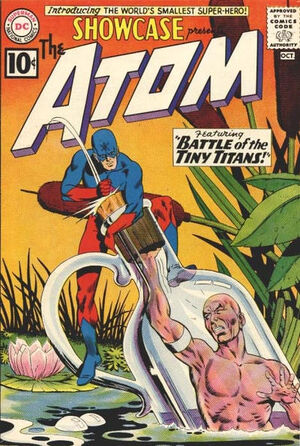 Now that I am able to turn myself into a human Atom -- who knows what strange and wonderful things may happen?

Appearing in "Birth of the Atom!"Edit

Synopsis for "Birth of the Atom!"Edit

When scientist Ray Palmer finds a dwarf star fragment, he creates lenses out of it to create a shrinking device. However, all of his tests finds that every object he shrinks with the lenses explodes after an hours work.

One day while taking out his fiance Jean Loring and an hiking club to a cave, they get trapped in an avalanche. Going on his own to find a way out, Ray decides to use his lenses to shrink himself down to size to climb up to an opening and make it larger, using an engagement ring he has for Jean.

After succeeding in making an opening, Ray returns to his original size, and believes that he survived the experience when drippings from the cave landed on the lenses. However, after everyone is safe, Ray still finds that his lenses still cause items to explode after an hour, leaving Ray to realize that perhaps something in his own body prevents him from being destroyed when staying at a small size for an extended period of time.

Appearing in "Battle of the Tiny Titans!"Edit

Synopsis for "Battle of the Tiny Titans!"Edit

When one of Jean Loring's friends is accused of stealing money from the bank where she works as a teller, she explains that a little man appeared and stole the money. When Jean tells Ray that her friend is a trustworthy person, Ray decides to see what he can do with his shrinking powers.

Having created a costume and dubbing himself the Atom, Ray springs into action, however before he can investigate he finds the strange little man appearing in his apartment.

After a battle against the little man, he learns that he's an alien named Kulan Dar. Dar's is of a race of people who can teleport across the universe when they use the element Europium. However, arriving on Earth, he became prisoner of a crook who took control of his will bending device and has been using him to commit robberies on his behalf.

With the help of Kulan, the Atom tracks down the criminal down and after a battle against Dar who is back under the crooks control, the Atom manages to defeat him and turn him over to the authorities. Kulan Dar appears in court and clears Jean's friends name before returning to his home planet.

Appearing in "Inside the Atom!"Edit

Synopsis for "Inside the Atom!"Edit

A brief publication history of the Atom, including the Golden Age version of the Atom and the Justice Society of America.

Retrieved from "https://heykidscomics.fandom.com/wiki/Showcase_Vol_1_34?oldid=1496239"
Community content is available under CC-BY-SA unless otherwise noted.