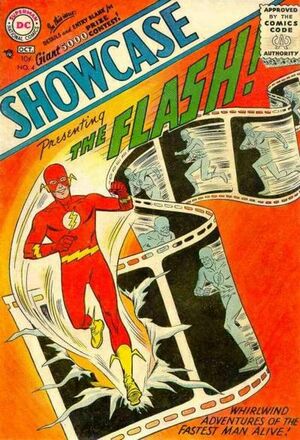 I wonder what it would really be like -- to be the fastest man on earth?

Appearing in "Mystery of the Human Thunderbolt!"Edit

Synopsis for "Mystery of the Human Thunderbolt!"Edit

The story introduces readers to Barry Allen, a police scientist who one day is doused with chemicals that are struck by lightening. Barry soon finds that he has been endowed with super-speed, and so creates a costume (which contracts and hides in his ring) and takes on the name of his favorite comic book character: The Flash.

In his first mission as the Flash, Barry goes after the criminal known as the Turtle Man, dubbed the worlds slowest man. The Turtle Man tries to rob a bank, however he is ultimately thwarted by the Flash, who has troubles catching him at first because his super-speed would work against him while going up against the worlds slowest man. Ultimately, the Flash captures his opponent and turns him over to the police.

Appearing in "The Man Who Broke the Time Barrier!"Edit

Synopsis for "The Man Who Broke the Time Barrier!"Edit

When a series of items begin vanishing from peoples possession, Barry Allen becomes involved as the Flash when a beaker he's experimenting with vanishes as well. Tracking down the culprit puts Barry up against Mazdan, a criminal from the future who was supposed to be sent to the 50th Century to serve his sentence on a desolate Earth, but was sent to the past by mistake instead.

Able to avoid Mazdan's weapon, Flash captures the crook, however he manages to break out of prison using his superior scientific knowledge. Catching up with Mazdan again, the Flash tries to capture him again, but stops when Mazdan petitions the Flash to allow him to return to his own time. Instead of allowing him to go in his own time capsule, the Flash instead breaks the time barrier by running at super speed, and turns Mazdan over to the authorities in the future, who send Mazdan to the correct era to serve out his punishment. The Flash then returns to his own time and resumes his civilian life once more.

Retrieved from "https://heykidscomics.fandom.com/wiki/Showcase_Vol_1_4?oldid=1496714"
Community content is available under CC-BY-SA unless otherwise noted.