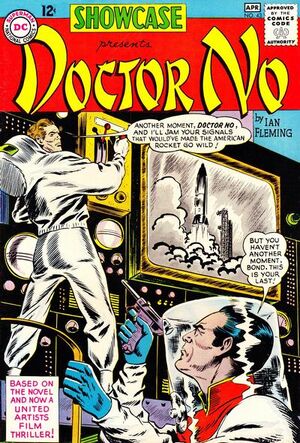 John Strangways, the British Intelligence (SIS) Station Chief in Jamaica, is ambushed, killed, and his body taken by three assassins known as the "Three Blind Mice". In response, MI6 agent James Bond (007) is summoned to the office of his superior, M. Bond is briefed to investigate Strangways' disappearance and to determine whether it is related to his cooperation with the American Central Intelligence Agency (CIA) on a case involving the disruption of Cape Canaveral rocket launches by radio jamming.

Upon his arrival at Kingston Airport, a female photographer tries to take Bond's picture and he is shadowed from the airport. He is picked up by a chauffeur, who Bond determines to be an enemy agent. Bond instructs him to leave the main road and, after a brief fight, Bond starts to interrogate the driver, who then kills himself with a cyanide-embedded cigarette.

During his investigation Bond sees a picture of a boatman named Quarrel with Strangways. Bond locates Quarrel but finds him to be un-cooperative when he interviews him. Bond also recognises Quarrel to have been the driver of the car that chased him from the airport. Bond follows Quarrel and is about to be beaten by him and a friend when the fight is interrupted by the man from the airport who has been following Bond: he reveals himself to be CIA agent Felix Leiter and that not only are the two agents on the same mission, but also that Quarrel is helping Leiter. The CIA has traced the mysterious radio jamming of American rockets to the Jamaica vicinity, but aerial photography cannot see the exact location of its origin. Quarrel reveals to have been guiding Strangways around the nearby islands to collect mineral samples. He also tells about the island of Crab Key, owned by the reclusive Dr. No.

After finding a receipt in Strangways' house about mysterious rocks naming, Professor R.J. Dent, Bond meets with Dent who says he had assayed the samples for Strangways and determined them to be ordinary rocks. This visit makes Dent wary and he takes a boat to Crab Key where Dr. No expresses displeasure at Dent's failure to kill Bond and orders him to try again, this time with a large venomous spider. Bond survives and after a final attempt on his life, sets a trap for Dent, who he captures, interrogates and then kills.

Having detected radioactive traces in Quarrel's boat, where Strangways' mineral samples had been, Bond convinces a reluctant Quarrel to take him to Crab Key. There Bond meets the beautiful Honey Ryder, dressed only in a white bikini, who is collecting shells. At first she is suspicious of Bond but soon decides to help him, leading them all inland to an open swamp. After nightfall they are attacked by the legendary "dragon" of Crab Key which turns out to be a flame-throwing armoured tractor. In the resulting gun battle, Quarrel is incinerated by the flame-thrower whilst Bond and Honey are taken prisoner. Bond and Honey are decontaminated and taken to quarters before being drugged.

Upon waking they are escorted to dine with Dr. No. He reveals that he is a member of SPECTRE (SPecial Executive for Counter-intelligence, Terrorism, Revenge, and Extortion) and plans to disrupt the Project Mercury space launch from Cape Canaveral with his atomic-powered radio beam. After dinner Honey is taken away and Bond is beaten by the guards.

Bond is imprisoned in a holding cell but manages to escape through a vent. Disguised as a worker, Bond finds his way to the control centre, a multi-level room full of high-tech instrumentation with an atomic reactor set into the floor, overseen by Dr. No from a command console. Bond overloads the nuclear reactor just as the American rocket is about to take off. Hand-to-hand combat ensues between Bond and Dr. No, with the scientist being pushed into a control board and dying electrocuted. Bond then finds Honey and the two escape in a boat.