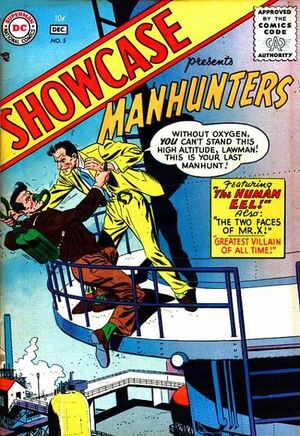 Appearing in "The Greatest Villain of All Time"Edit

Synopsis for "The Greatest Villain of All Time"Edit

Detective Harry Fowler was called onto the scene of a strange crime. A man dressed as a character, re-enacted a scene from one of Fowler's old movies that he wrote before he became a detective, and stole an antique clock. Harry and Sergeant Collins follow the clues from each of Harry's four movies, just missing the criminal at the scene of the crime. However, through the process of elimination, they discover the thief's identity is the movie director Leif Conrad, who worked with Harry on his pictures.

Finally they caught up to him when he was re-enacting Fowler's "Phantom of the City", getting ready to jump off a bridge in the famous 'death-dive' scene. Harry manages to trick him by yelling "Cut!", causing Conrad to hesitate. The cops are then able to bust him.

Appearing in "The Two Faces of Mr. X"Edit

Synopsis for "The Two Faces of Mr. X"Edit

The FBI hires billboard model Don Reed to portray a known criminal overlord, Alex Tate. Tate is supposed to be recieving a list from his lietenants naming all the underlings in his employ. The FBI captures Tate so that Reed can switch places with him. But unbeknownst to all, Tate was also scheduled to have plastic surgery that day, so that he could change his appearance.

Fortunately, the surgeon, Doctor James, was being forced by the thugs to do the job, so while Reed and the doctor were back in the surgery room, the two of them came up with an exit strategy. While Reed, wearing bandages over his face, distracted the criminals, Doctor James came out with the knockout gas cannister and sprayed the men with it's contents. Afterwards, the FBI came charging in, arrested Tate's thugs, and retrieved the lists of underlings.

Appearing in "The Human Eel"Edit

Synopsis for "The Human Eel"Edit

The Eel is an international criminal who travels the globe in his crime spree, so named because of how easily he slips through the cops fingers. He is equipped with a special electric device underneath his coat that lets him shoot sparks. Agent Frank Drew has been chasing after the Eel since the criminal first trapped him New York. A trap that resulted in Drew having respiratory trouble wherever the air was thin. The Eel used that weakness to his advantage, whener Drew would chase him, he'd simply shock the gun out of Frank's hand and then lead him on a chase up a tall structure, forcing Drew to follow until he could no longer breathe, allowing the Eel to always evade his capture.

Retrieved from "https://heykidscomics.fandom.com/wiki/Showcase_Vol_1_5?oldid=1457627"
Community content is available under CC-BY-SA unless otherwise noted.