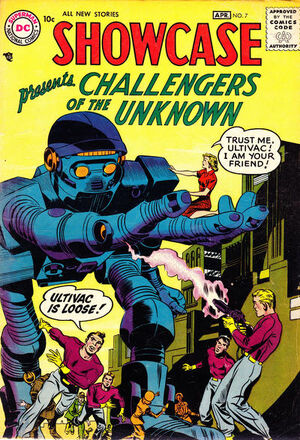 As the Challengers are pondering when their next adventure will be, they are interrupted by the arrival of former war criminal Felex Hesse. He asks the Challengers to protect him from his rogue creation Ultivac. Ultivac, he explains, is a giant robot built by he and fellow former prisoner Floyd Barker, which upon activation went after his creator. Once he finishes explaining his story, the group are attacked by Ultivac. Unable to stop Ultivac from capturing Hesse, the Challengers seek the help of a top secret laboratory and its director general June Robbins. Meanwhile Ultivac has constructed an army of robots modeled after Hesse to collect resources it needs for continued existence. The Challengers find and incapacitate it. Hesse and Barker repossess the robot and try to make money displaying it as a sideshow attraction. However, Ultivac, having developed a liking to Robbins, breaks free and kidnaps her. The Challengers talk Ultivac into peaceful relations with humanity when suddenly Hesse arrives and destroys it with a ray gun. Rocky is injured in the altercation. With Ultivac destroyed, Hesse is taken away and Rocky undergoes surgery, making it through with flying colors.

Retrieved from "https://heykidscomics.fandom.com/wiki/Showcase_Vol_1_7?oldid=1457629"
Community content is available under CC-BY-SA unless otherwise noted.