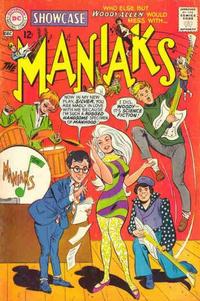 Appearing in "What Swings, Fiddle Strings?"Edit

Synopsis for "What Swings, Fiddle Strings?"Edit

The Maniaks have just finished another performance when they are approached by Woody Allen. He has decided they would be perfect for a new musical he has written set during the Civil War. The boys seem interested but Silver Shannon only agrees after Woody sets financial terms.

Soon, Woody has hired the remaining cast and crew. The musical begins rehearsals, though the critics hate it. Woody brings in a play doctor but it turns out the man was the wrong kind of play doctor. The musical goes on to do a few warm-up performances before debuting on Broadway.

The play introduces the key characters, a male and a female Confederate spy sent to spy on a Union fort, and the supporting cast. After several musical numbers, the spies each realize they are love with someone from the north. Shortly after, they are captured and placed on trial. If they are convicted, both will hang. Midway through the trial, a courier arrives with important news. The war ended over a year ago. Since the war was over before the spies even arrived, they are released.

The play ends and Woody anxiously awaits the reviews. The Maniaks aren't very interested. They are awaiting word on whether or not their tryout in Showcase was successful and encourage readers to buy their book.

Retrieved from "https://heykidscomics.fandom.com/wiki/Showcase_Vol_1_71?oldid=1457706"
Community content is available under CC-BY-SA unless otherwise noted.