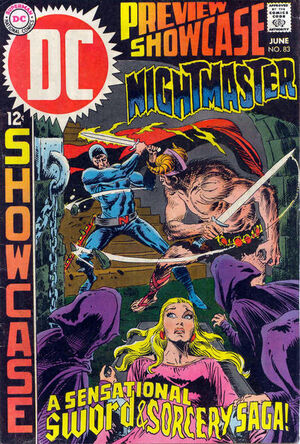 Appearing in "Sing a Song of Sorcery"Edit

Synopsis for "Sing a Song of Sorcery"Edit

Nightmaster and Boz meet and befriend Tark, a barbarian, and learn that the Warlocks have captured Janet so that the Warlock King can use her to make magic with which to invade Earth.

Retrieved from "https://heykidscomics.fandom.com/wiki/Showcase_Vol_1_83?oldid=1457718"
Community content is available under CC-BY-SA unless otherwise noted.