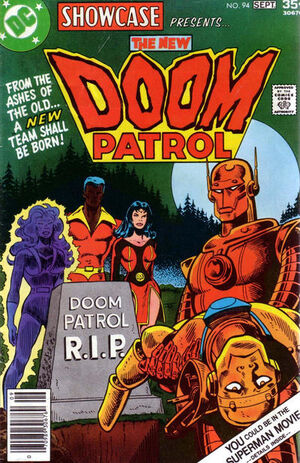 It takes more than a fancy name and a costume to be tough.

Mere months after their seeming demise, Robotman washes up on a beach in the Caribbean where he is found, rescued, and repaired by Doc Magnus. Returning to the DP's old HQ where he finds (and briefly fights) a group of people calling themselves the Doom Patrol -- Celsius, Tempest, and Negative Woman.

They reveal that General Immortus is seeking a new immortality formula developed by Niles Caulder. Immortus attacks, eventually disabling them is a a powerful noxious gas.

Retrieved from "https://heykidscomics.fandom.com/wiki/Showcase_Vol_1_94?oldid=1491001"
Community content is available under CC-BY-SA unless otherwise noted.