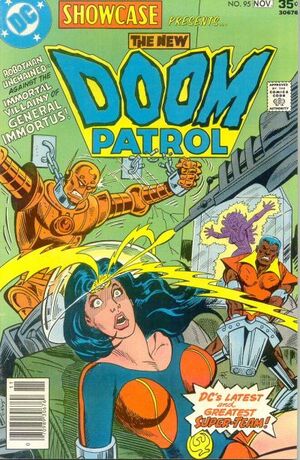 Appearing in "The Origin of Celsius"Edit

Synopsis for "The Origin of Celsius"Edit

Immortus tries to take the immortality serum formula from the mind of Celsius. using his Psycho-Probe he learns of her history with Niles Caulder (The Chief). While working for the Red Cross in India, Caluder treated Arani, fell in love, but was unable to take her with him to the United States. Leaving her with a religious sect, she eventually discovered her powers.

Eventually Caulder returned to India. Immortus had, his identity unknown to Caulder, supplied him with unlimited funds to research and develop the serum.[1] Caulder, wary of unleashing such a serum on the world until his mysterious benefactor is revealed, makes it a wedding gift to Arani.

Meanwhile, during the probe, an American intelligence agent stakes out Doom Patrol Headquarters on the trail of Negative Woman.

As Tempest escapes his bonds, Immortus gets the information he wanted. As Robotman breaks through the wall, he learns they are on the surface of the moon. Celsius plugs the hole with her ice powers and the team. Fighting through Immortus' troops, Celsius find the General as he drinks the serum.

At DP HQ, the agent works past the automated defenses.

Immortus grows younger and more virile, but the effects are only temporary. Onboard an escape ship, Celsius reveals that the serum must be adjusted to the individual's body chemistry to be effective. Returning to HQ, the encounter the agent -- with a gun trained on Negative Woman.

Retrieved from "https://heykidscomics.fandom.com/wiki/Showcase_Vol_1_95?oldid=1457730"
Community content is available under CC-BY-SA unless otherwise noted.