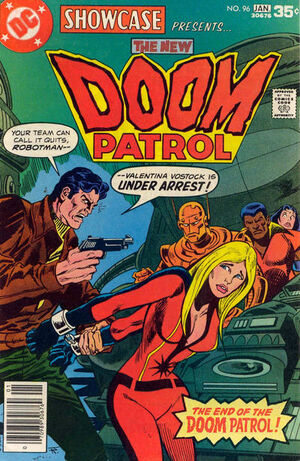 Cable tries to place Negative Woman under protective custody and is handcuffed and thrown into a closet for his troubles.

A Russian agent called The Cossack appears to kill Neg Woman. Disabling her energy form with an electrical sword, he prepares to leave when the rest of the Doom Patrol intervene. The Cossack gains the upper hand and takes Neg Woman away on his horse, which has suddenly sprung wings and flies off.

Robotman instructs the others to ready the helicopter for pursuit. After they take off, Cable escapes his prison, and, upon leaving the HQ, tussles with Russian agent, Brunovich, knocking him out.

Fighting the Cossack, a blast from Tempest reveals him to be a robot. No longer constrained, the team defeats him quickly. Vostok reveals that she stole an experimental jet fighter when she fled her country.

Retrieved from "https://heykidscomics.fandom.com/wiki/Showcase_Vol_1_96?oldid=1457731"
Community content is available under CC-BY-SA unless otherwise noted.