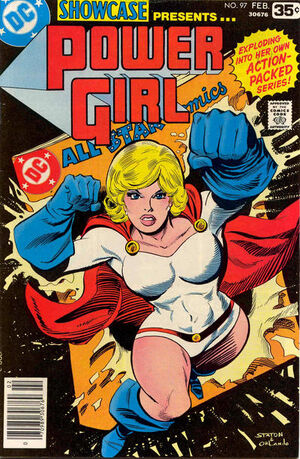 Foiling a robbery attempt, Power Girl is inundated by reporters. Fleeing the scene, she recounts her origins to reporter Andrew Vinson and feels that she doesn't fit in on Earth. Leaving Vinson alone, he stumbles upon a powerful artifact that is somehow related to Power Girl's origin, which takes possession of him and leads him to attack Power Girl!

Retrieved from "https://heykidscomics.fandom.com/wiki/Showcase_Vol_1_97?oldid=1457732"
Community content is available under CC-BY-SA unless otherwise noted.