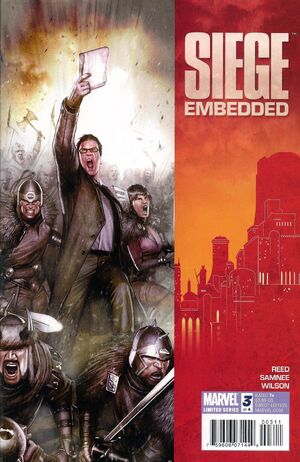 You will help me spread the word to the world about Norman Osborn, yes. We will show them all the good he is doing here.

Ben Urich and Will Stern are running away from H.A.M.M.E.R. pursuing them. They split in a maze of crates. Unfortunately, he runs into a dead end, so he hits an agent across the heat with his camera. Meanwhile, Urich manages to sneak aboard a plane Todd Keller is in. strapping in next to Keller's producer, he learns that they are going to film the invasion of Asgard. Keller isn't enthusiastic about personally being there, Agent Abrams assures him that he will get great ratings. Then suddenly, Venom crashed onto the plane, intent on eating everyone. As the plane goes crashing down, Abrams attempts to stop Venom, only to be mauled by him. He then goes after Keller, though Urich saves his life by shooting Abram's gun. Angry at being shot, Venom advances on Urich. But then, the plane crashes, launching him out of the plane. the producer and Urich help Keller out of the wreckage, before introducing himself. He promises Keller then once they are out of this madness, he'd like to discuss his unwavering support of Norman Osborn. However, Keller pulls a gun out of the sling his producer used to bandage his arm, demanding that Urich help him in proving that this invasion is a good idea.

They get the camera rolling, as Keller shows to the world the devastation of Asgard. He claims that the Asgardians have declared war on them, seeing them as nothing more then play things. Then suddenly, his broadcast is interrupted by the a flash of energy.

Back at Tinker Force Air Base, H.A.M.M.E.R. agents are summoned to come to Osborn's aid. With them distracted, Stern regains his news van and rushes off to Broxton. But when he arrives, he sees Asgard falling down to the ground, which he records with his camera.

Retrieved from "https://heykidscomics.fandom.com/wiki/Siege:_Embedded_Vol_1_3?oldid=1452779"
Community content is available under CC-BY-SA unless otherwise noted.