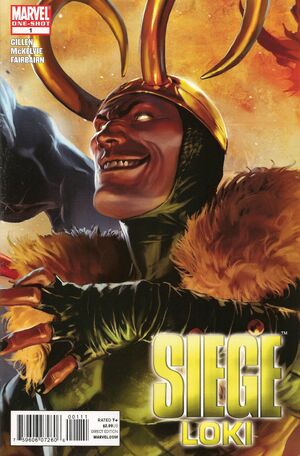 No. Mischief is a small thing, a toy I've well used and discarded. This isn't mischief. This is mayhem. Just watch.

Loki continues to move his plans forward. In Latveria, Loki seeks out the Asgardians he had sent to kill Bill, and finding their spirits, entraps them in order to bring out the Disir. They arrive, and Loki defeats them, gaining their servitude. He then travels to Las Vegas to visit his daughter Hela, and reveals to her that the Disir are indeed real. There will be many fallen during the siege of Asgard, and Loki wonders if she has prepared for them. She tells him that of course she hasn't, she is Hela without a Hel. Loki wonders what boon could one request if he delivered unto her a new Hel. In Mephisto's realm, Loki and Mephisto discuss a real estate deal. If he will ceede to Hela a slice of his own realm for 1001 years, Loki will give the leash of the Disir to him for 101 days. Above Asgard, Loki, Mephisto and Hela agree to the contract. Mephisto will gain the control of the Disir, Hela gets a new realm of her own, and Loki is stricken from the Books of Hel. When he dies, he is Hel-bound no more. Absolute freedom is now is.

Retrieved from "https://heykidscomics.fandom.com/wiki/Siege:_Loki_Vol_1_1?oldid=1452781"
Community content is available under CC-BY-SA unless otherwise noted.