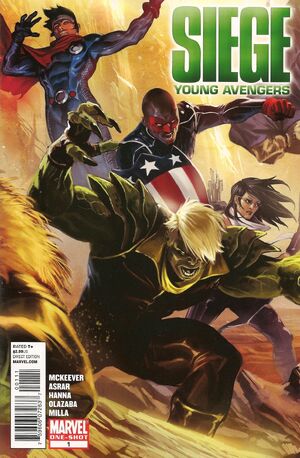 Hey! Geriatrics! Let's get a move on. The Avengers need us!

Appearing in "Underneath It All"Edit

Synopsis for "Underneath It All"Edit

Wiccan and Hulkling lament the destruction of Asgard. They then find the Wrecking Crew, attempting to loot the throne room. Refusing to let them desecrate this sacred place, Wiccan goes toe-to-toe with the Wrecking Crew. But the crew, specifically the Wrecker, doesn't take him seriously. But Wiccan showed how serious he was by unleashing powerful bolts of lightning.

Meanwhile, Speed is racing all around, ferrying any survivors into the fields. Eventually, he becomes exhausted, blaming himself for not being quick enough. Found by Ronin, he counsels Speed, telling him that he's doing just fine.

Elsewhere, Patriot and Hawkeye are trapped beneath rubble. The latter considers using her trick arrows to get them out of this, but the former doesn't want to take that risk. They have small argument before kissing. Then suddenly, a small crevice opens, giving them and opening to blast through. The Young Avengers then reassemble and rush off to help Captain America.

Retrieved from "https://heykidscomics.fandom.com/wiki/Siege:_Young_Avengers_Vol_1_1?oldid=1452786"
Community content is available under CC-BY-SA unless otherwise noted.