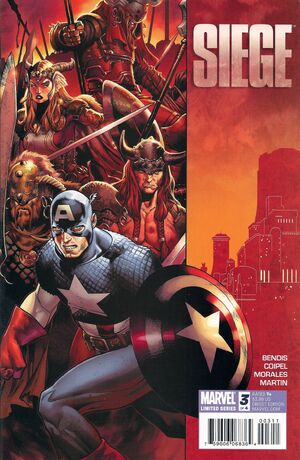 Appearing in "The Siege of Asgard-Intercepted"Edit

THE MARVEL BLOCKBUSTER OF THE YEAR!! In the halls of Asgard and on the streets of small town America the entire Universe is gripped in a the greatest battle ever seen: SIEGE!! Lives have been lost! Lines have been drawn! And the battle for Asgard is in full force. The moment for revelations and life-changing moves is here, and for some, this will be the last choice they ever make in this world. What happens next is so epic, so historic, that it changes the entire dynamic of the Marvel Universe. You're gonna want to be there for this one...trust us.

Retrieved from "https://heykidscomics.fandom.com/wiki/Siege_Vol_1_3?oldid=1729313"
Community content is available under CC-BY-SA unless otherwise noted.