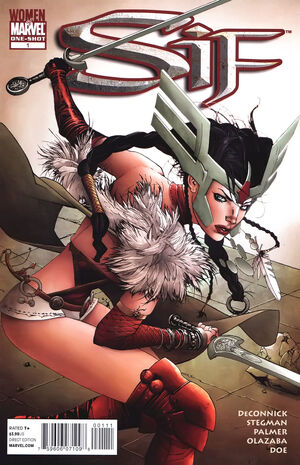 I am the Lady Sif. Born a goddess and forged a warrior. I have been baptized in the tears of my enemies. And their children's children fear my name.

Appearing in "I am the Lady Sif"Edit

Synopsis for "I am the Lady Sif"Edit

In the Sooner Hotel, Sif is taking a bath, reflecting on Loki possessing her body for so long. She hears a creak of her door and goes to kill the intruder only to discover Beth Sooner bringing her fresh towels. Later, in the Okie Doke Bar, Sif nurses a drink and fends off amorous attacks, when Beta Ray Bill and Ti Asha Ra enter, looking for Thor. Diseased Pirates have captured Skuttlebutt and are doing something to her programming. She has ejected the Korbonites and won't let them back in, so they came for Thor's help. Unfortunately, he's occupied elsewhere, but Sif is eager to help. They travel to Skuttlebutt in a shuttle, and Sif breaks in and is confronted by the Diseased Pirates. They are all infected with some kind of virus that is similar to the Transmode Virus, but is not it. They manage to infect Sif, but when memories of her body being controlled like a puppet by Loki surface, she lashes out, killing the primary host of the disease. She awakens in the medical bay, having recovered. Bill and Ra are there and they tell Sif that Skuttlebutt is fine now, stronger than before. Sif tells them that she is happy for them, and they drop her off back in Broxton.

Retrieved from "https://heykidscomics.fandom.com/wiki/Sif_Vol_1_1?oldid=1452787"
Community content is available under CC-BY-SA unless otherwise noted.