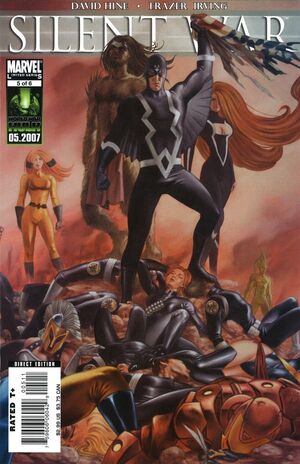 Appearing in "Act 5: The Hero"Edit

Synopsis for "Act 5: The Hero"Edit

The Inhumans have landed and begun their attack on the Pentagon. Black Bolt stands silent as Karnak instructs the Inhumans. They easily cut through the human military, but it’s not long before the Mighty Avengers arrive. The Avengers descend upon the Inhumans and attack. Sentry however, stays out of the fight. Instead of fighting, he questions the whole idea of the Avengers and says, to himself, that they are less heroes, and more soldiers. They have the power to fight and they use it by following the orders of others. They don’t think, they just fight. Even Iron Man, the most intelligent of them is primarily a warrior. While Sentry is thinking about all this, the rest of his team is calling for him to come into battle. He continues to stay out of the fight but asks Cloc to tell him what’s going on inside and the machine complies.

While a skeleton crew of guards stands watch of the imprisoned Inhumans, Woz, an Inhuman capable of traveling through reflective surfaces infiltrated the building. He was necessary because the Pentagon had technology that prevented the rest of the Inhumans from teleporting in via Lockjaw. Once inside, Woz sets off an explosive that opens a path to where his comrades are being kept. Upon seeing Woz, Jolen demands to be let out, but Woz has to turn off the security holding them in their cells first. Fortunately, has a telepathic link with a diviner, an Inhuman hacker, so he is able to shut down the Pentagon’s computers and break Gorgon, Jolen and the others out. Gorgon says that they won’t leave without the crystals and Woz tells him that he knows where they are.

Cloc tells Sentry all of this and also informs him that the diviner has made the Pentagon’s surveillance systems think that the Inhumans were still locked up, allowing them to roam freely. Cloc asks Sentry if he should alert Iron Man, but Sentry says no.

Meanwhile, on the battlefield, a psychic Inhuman gets into Ares’ mind and makes him think he is standing in the blood of all the people he’s killed. The blood is a little higher than his waist and Ares says, “Ha! It was so few?” Seeing that Ares is incapacitated, Ms. Marvel sends Wasp to take down the psychic. The psychic is knocked out but Ares is still disabled. Cloc says that now that Ares is down, Inhuman victory is a 59% probability and recommends that Sentry intervene. Sentry asks what will happen if he gets into the fight but Cloc says there are too many variables to predict. Sentry thinks to himself that if he starts fighting Black Bolt might stop holding back like he was currently doing.

In a secret part of the Pentagon, the Inhumans find that the crystals are not where they should be. As Gorgon starts to destroy the place, Cartwright comes up behind them and gives the crystals. He says he’s returning them because they are part of the Inhuman culture, but after they leave his face is revealed and it’s obvious that he’s about to die from what the crystals did to his body. With his last words he says that he hopes the crystals will kill them all.

In Attilan, Medusa takes Luna to see Maximus. Luna doesn’t want to go but Medusa wants her to heal her uncle. Medusa makes Luna look at Maximus and the girl sees a black octopus trapped in a cage of light in his head. Maximus says the Pacifiers put the monster there, but Luna thinks that they just trapped it so it couldn’t get out. Luna then looks at Medusa and sees that she’s not herself. She can’t do anything though because Medusa forces her to “heal” Maximus. Inside his head, the cage fades and the creature is freed.

Outside the Pentagon, the battle continues to rage on. Ares is still down and the Sentry still won’t help so Iron Man is forced to use a full-on repulsor blast. The Inhumans are scattered and Karnak tells them to gather around Lockjaw for a retreat. Ms. Marvel says that they won, but Maria Hill radios in and tells them that they should be careful. When Black Bolt first declared war, he did it by having all the Inhumans leave and blasting the humans with a whisper. Maria thinks he might be doing it again. She’s right.

Black Bolt opens his mouth and levels the Avengers. The blast also breaks down a wall of the Pentagon. The Avengers get up (most are ok but Black Widow is deaf) in time to see Gorgon coming through the hole in the wall with the other Inhumans who were trapped. Gorgon gives Black Bolt the crystals and Iron Man tells Sentry that he needs to attack before the Inhumans get away. Sentry says that if he fights, Black Bolt could actually hurt them instead of just whisper. As the Inhumans leave, Sentry says it’s over, but Iron Man tells him it’s not.

Twenty-four hours later, Iron Man is sitting with Maria Hill discussing what will happen next. Because of the poor showing of the Avengers, the president won’t be sending them back into battle against the Inhumans. Instead, they’ll be sending in the Terrigen-altered marines.

Retrieved from "https://heykidscomics.fandom.com/wiki/Silent_War_Vol_1_5?oldid=1452792"
Community content is available under CC-BY-SA unless otherwise noted.