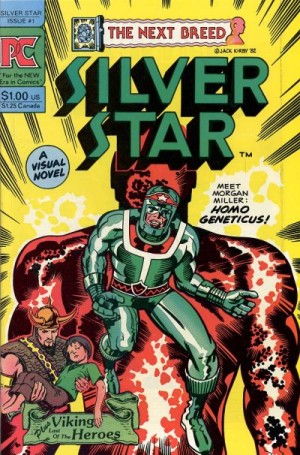 Morgan Miller is a soldier serving in Viet Nam when he does something incredible. He picks up an enemy tank with one hand to smash it against the rocks. After doing this, he passes out and the officers in charge wrap him up in a silver containment suit. He is awarded a silver star for his performance in battle so that is what his call sign becomes. While he is projecting his thoughts, he encounters Darius Drumm who has also been genetically enhanced. Drumm wishes to destroy his fellows so that he will have no competition in his schemes of power and domination. He sends a mental robot construction against Silver Star which gets defeated, and then after threatening to kill him after he has executed the others, Drumm disappears.

Retrieved from "https://heykidscomics.fandom.com/wiki/Silver_Star_Vol_1_1?oldid=1624516"
Community content is available under CC-BY-SA unless otherwise noted.