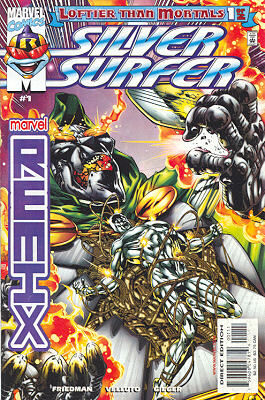 "Behold the new sun that soars in the heavens! Gaze upon the great and terrible star whose name is Doom!"

Appearing in "Loftier Than Mortals"Edit

Synopsis for "Loftier Than Mortals"Edit

The Silver Surfer is despondent at being trapped on Earth, unable to sail through space and stuck with on a planet of barbarians. While flying over Doomstadt, he receives an imperial summons and responds. Meeting with Doom Rex, Monarch of Latveria, he is given a tour of Castle Doom by the "people's humble servant." Showcasing the technology he uses for "the ennoblement" of his fellow man, he reveals his treachery as that same technology rips the power cosmic from the Surfer and infuses it into Doom. Doom then goes on a spree of rampant destruction around the world, getting used to his powers before his planned use of the power cosmic to annihilate his foes, the Fantastic Four.

Meanwhile, Norin Radd discovers that his silver skin has melted off while in a dungeon cell. He uses a mixture of subterfuge, mesmerism, and physical force to escape. On the way, he also releases Inga, a member of a rebel cell hoping to overthrow Doom. While heading to a safehouse, the two are recaptured in a city marketplace.

This is a popular storyline, as this storyline was also reimagined for Fantastic Four: Rise of the Silver Surfer in 2007.

Retrieved from "https://heykidscomics.fandom.com/wiki/Silver_Surfer:_Loftier_Than_Mortals_Vol_1_1?oldid=1498959"
Community content is available under CC-BY-SA unless otherwise noted.