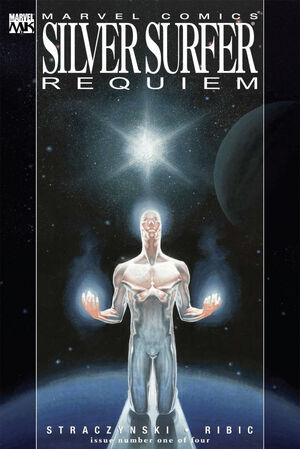 I understand that on Earth there are insects..Monarch butterflies...that often live only two weeks. To them, two weeks is a generation. So if I have but a month, then I have two generations of life ahead of me.

The Silver Surfer is standing before a gigantic nebula pondering a matter of somber importance. Alone and concerned, he turns his sights towards Earth to consult with the only people in the universe that he would consider his friends – the Fantastic Four.

He arrives outside the high windows of the Baxter Building and requests a private audience with Reed and Sue. Ben and Johnny watch their conversation from a distance and notice Sue steadily breaking down into tears. Reed makes the Surfer a promise to do everything he can to help him. The Surfer then flies off back, with the intent of visiting his home world, Zenn-La.

Later, Reed tells Ben and Johnny about his conversation with the Surfer, and why Susan was crying. The molecular bonds that make up the Surfer's metallic shell are slowly breaking down. The Silver Surfer is dying!

Retrieved from "https://heykidscomics.fandom.com/wiki/Silver_Surfer:_Requiem_Vol_1_1?oldid=1453049"
Community content is available under CC-BY-SA unless otherwise noted.