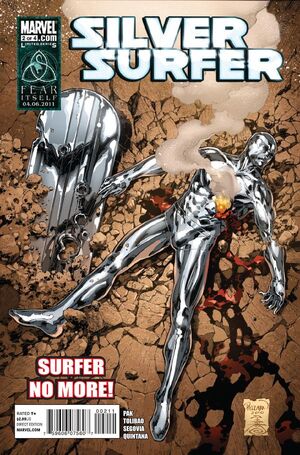 Surfer no more! Masterless. Powerless. Mortal. Humbled by the High Evolutionary, the Silver Surfer is now at the mercy of the masses he once flew far above. Can he escape persecution by human authorities in time to stop the Evolutionary from turning the legacy of Galactus to his own ends? And after all this time, does Norrin Rand still have what it takes to prove that one common man can save the world? The new gold standard for the Silver Surfer continues!

Retrieved from "https://heykidscomics.fandom.com/wiki/Silver_Surfer_Vol_6_2?oldid=1489004"
Community content is available under CC-BY-SA unless otherwise noted.