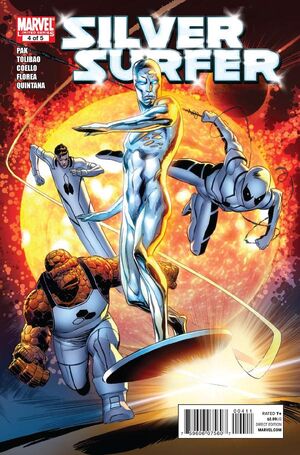 A NEW HERALD RISES AS THE FF’S FUTURE FOUNDATION GUEST-STARS! High Evolutionary’s grand design is rewriting the world and Surfer can’t save us on his own. The Future Foundation joins the fight as our penultimate issue builds to a cosmic climax that will be the Silver Surfer’s greatest sacrifice ever! Plus: A herald as you’ve never seen before!

Retrieved from "https://heykidscomics.fandom.com/wiki/Silver_Surfer_Vol_6_4?oldid=1723721"
Community content is available under CC-BY-SA unless otherwise noted.