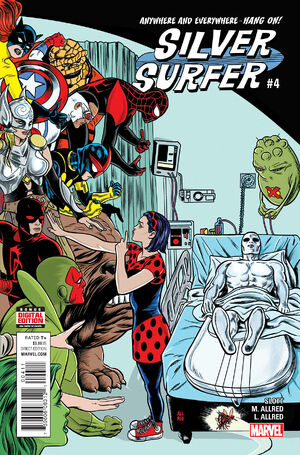 • There is a price to pay for what Norrin Radd has done.

• Some actions can never be taken back...or forgiven.

• Will any of Earth’s heroes stand by the Silver Surfer’s side in this, his greatest moment of need?

• A mythic tale in the Mighty Marvel Manner! Guest starring The Avengers, The Thing and major characters from around the Marvel Universe.

Retrieved from "https://heykidscomics.fandom.com/wiki/Silver_Surfer_Vol_8_4?oldid=1658687"
Community content is available under CC-BY-SA unless otherwise noted.