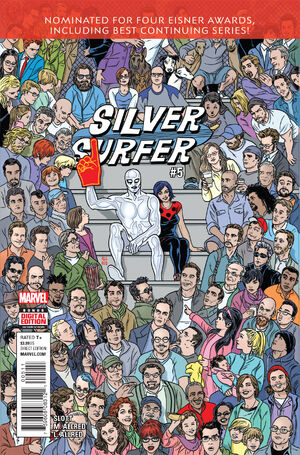 Appearing in "Citizen of Earth"Edit

• Are you still reeling from the massive status quo change from SILVER SURFER #3? Think our heroes need a break?

• No such luck. Because when the Surfer uses his powers to make Dawn’s time on Earth “better”, he unintentionally does something so devastating it might scar her for life.

• Get ready for the shocking revelation... that leads into the 200th Silver Surfer comic! You do NOT want to miss this one, True Believer!

Retrieved from "https://heykidscomics.fandom.com/wiki/Silver_Surfer_Vol_8_5?oldid=1658688"
Community content is available under CC-BY-SA unless otherwise noted.