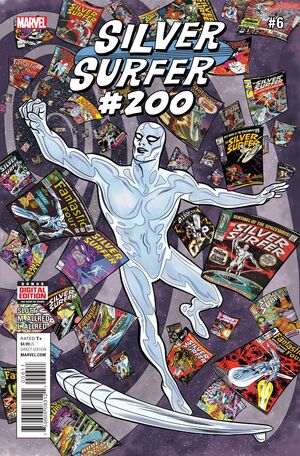 Appearing in "Understanding the Alien Heart"Edit

• After Norin Radd’s massive status quo change in the 50th Anniversary issue (no spoilers!), it’s now Dawn Greenwood’s turn. With one simple act of kindness, the Surfer may have forever changed her world.

• What’s going on? Why is San Francisco overrun by monsters? And what wall-crawling, web-spinning guest-star is swinging by to help out? (Okay, we’ll tell you that one! It’s Peter Parker, THE AMAZING SPIDER-MAN!)

• All this and tons of cosmic weirdness, surprise super heroes, and special stories as we celebrate the 200th Silver Surfer issue!

Retrieved from "https://heykidscomics.fandom.com/wiki/Silver_Surfer_Vol_8_6?oldid=1658689"
Community content is available under CC-BY-SA unless otherwise noted.