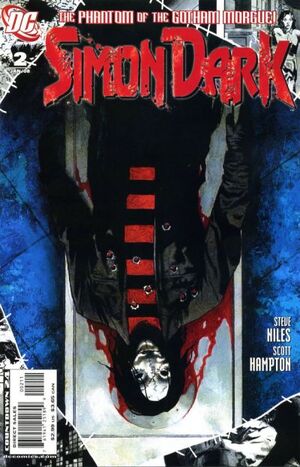 Okay, so we have a kid... sewn together from a zillion and one body parts, who tried to stop Eddie Machete, but sliced the head off another man a week before. This is going to make one hell of a report.

Appearing in "Rumors, Legends and Secrets"Edit

Synopsis for "Rumors, Legends and Secrets"Edit

A serial killer known as Eddie the Machete stalks and murders thirteen-year-old Rose San Filippo in Gotham Village. Eddie drops her body onto the pavement and turns around only to find Simon Dark staring back at him. Simon punches him and Eddie tries to stab him with his knife. Simon sidesteps the blade and shoves Eddie's head into a brick wall. The GCPD show up and Eddie takes off running. As Simon appears to be the more viable threat, the officers open fire on him and bring him down. His body is taken to the Gotham County morgue. Medical Examiner Beth Granger is shocked to discover that Simon Dark was actually a teenage boy. More macabre however is the crudely stitched together swatches of flesh across his chest and abdomen. Detective Tom Kirk refers to him as a patchwork quilt. Though neither of them believe Simon Dark to be the serial killer, Beth is certain that he is responsible for the death of Richard Guest at the Sacred Martyr Church. She finds the bloody garrote wire used to kill Guest in Simon's pocket. Suddenly, Simon returns to life and leaps off the medical table. He runs out of the building and Granger and Kirk give chase. Simon darts across the street and is stuck by an oncoming vehicle, but he quickly picks himself up and continues running. Beth and Tom lose sight of him soon after.

At the Sacred Martyr Church, the cultist named Vincent surveys the area in search of the man who interrupted their ceremony. He plucks out his own eye and plants it in a crack in the wall. Now he can literally keep an eye on the scene should Simon Dark ever return. An old woman witnesses this bizarre act, so Vincent shoots her in the head before getting back into his limousine.

Later, both Beth Granger and Rachel Dodds arrives at Webb's Market. Beth warns Rachel that she should leave, and goes to the market of the store. She descends a staircase into the cellar where a group of men are nursing the ailing Simon Dark. One of them asks Beth if she can help him. Rachel follows Beth into the cellar and is shocked by the eerie sight of Simon Dark. She races up the stairs and runs down the street. Nearby, Eddie the Machete sits in his van and sees Rachel running home. He starts up the vehicle and begins following her.

Back at his office, Tom Kirk speaks to an unknown individual on a telephone. He says "I think I found him", then hangs up the line. He then removes his wristwatch revealing a strange scar on the flesh beneath.

Retrieved from "https://heykidscomics.fandom.com/wiki/Simon_Dark_Vol_1_2?oldid=1457765"
Community content is available under CC-BY-SA unless otherwise noted.