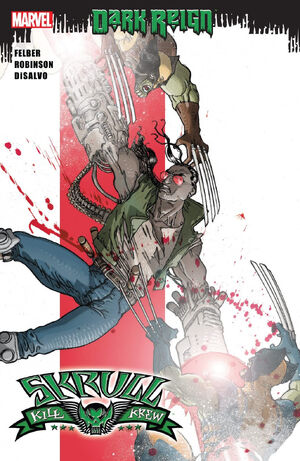 Maybe it has something to do with us all havin' been mostly dead. Or maybe my mates never were what I thought. Bu lookin' at 'em now...I don't know if they've got the stones to fight a war like this. Where everything's twisted, all out of shape. And where the rest of the world's got other problems and could give a toss about a war they were already tired of. That's when you need a hardcore bugger who can fight on, not because of some whinging principle...but because he really bloody enjoys it.

One Wolverine ain’t enough for ya? How about TWO? Depending how our story conference goes tomorrow...you might even get three! Evil Skrull scions! Massively malevolent cow meat! And a guy with a gun arm! This over-the-top follow-up to last year’s Secret Invasion continues with the return of more members of the Krew...including a white-supremacist who hasn’t read the paper in about a year.

Retrieved from "https://heykidscomics.fandom.com/wiki/Skrull_Kill_Krew_Vol_2_3?oldid=1453115"
Community content is available under CC-BY-SA unless otherwise noted.