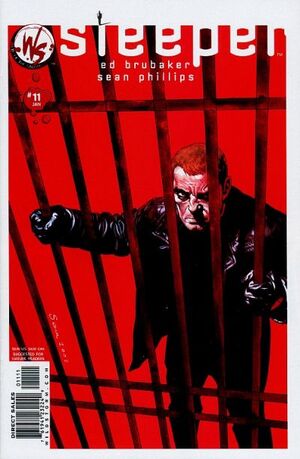 I'd crushed charred baby skulls underfoot, and choked the life out of freely-elected Presidents so we could replace them with hand-picked dictators. And yet, at the end of the day, I still believed I was one of the good guys.

In the past, Holden Carver is being drop off undetected via helicopter by his superior John Lynch to infiltrate Tao's organization. Lynch retells his instructions to Holden while undercover and acknowledge that once he left there is no turning back. Holden then importantly ask him about what if he were caught by their own organization. Lynch answers that the price of treason would be death, but given Holden's powers, he could be study and dissected. Lynch assures Holden that if everything is compromise he will break his silence and would clear his name, even if the operation was a success.

In the present, Holden is detained in an I.O. isolation room and finds his wounded knee patched and healed. Learning from his experience in I.O. Holden knew that the organization will isolate him and make him lose his mind as a way to study him before doing their interrogation. After being detained for five days, Holden awakens to find himself entrapped in a device. He is confronted by Marc Slayton, who then criticize Holden for betraying his nation and joining Tao. Having a "stenographer" to detect Holden's mind, Marc questions Holden as to where Tao is. However, the "stenographer" read through Holden, who reveals that his condition prevents mind-readers from reading through his nervous system, which his mind is "blocked-up". Seeing that there is no point in this, Marc have alternatives for Miss Misery instead.

Holden is return to his cell where he can hear Miss Misery's screams from her interrogation. Holden tries to block it out by thinking through his situation and consider telling the truth to Slayton as a double-agent, but knew Slayton wouldn't believe him without proof.

That night he is personally visited by Veronica St. James. She tells him that she strongly believes that he is innocent given that he spared her fiancee's life and suspects that he is the agent that Sir Malcolm Jones was trying rescue when he died. Holden refuse her help. Veronica, upset, wants to know if he is the same man she loved would commit the crimes he did. Holden at first wants to tell the truth to her but decides not to as he allows Lynch to tear their relationship apart, meaning that he betrays Veronica and could ruin her life. Holden bluntly refuse to talk any further as Veronica sadly walks away. Holden continues to ponder and thinks of the people he killed on his account, and so many others personally hurt, and accept that he deserves to be lock away and believe it is the reason why he didn't tell Slayton that he was on his side.

Slayton again meets Holden and informs him that after learning from both Veronica St. James and Miss Misery, he discover that the two believed that Holden is a undercover operative working for I.O. Holden doesn't believe that Miss Misery would think that he is a double agent, but Marc tells that after torturing Miss Misery without any leads they finally uncovered it after threatening her of what they will do to Holden. This forces her to reveal that Tao places Holden as his top suspect in the Syndicate's internal mole hunt, and that Holden had knocked her out in the warehouse. Holden still refuses to acknowledge this. Marc, in the end, decide that Holden's wanted status as a rogue agent will be transferred to an I.O. lab "buried in the Rocky Mountains".

Holden is then lead away. A scientist hurried to Slayton informing him that Miss Misery is becoming sick. Knowing her condition, Holden tries to tell Slayton that Misery is dying but his pleas are ignored. Suddenly the entire hallway is explosively breach as the Syndicate's Blackguards storm the area and recover Holden. Holden is taken outside in a wooded wilderness and is informed by a Blackguard that Tao have come to save him. This revelation shocked Holden and he kills the Blackguard, and runs into the woods, deciding that he cannot go back to the Syndicate nor to anyone, but doesn't know where he is going.

Retrieved from "https://heykidscomics.fandom.com/wiki/Sleeper_Vol_1_11?oldid=1457812"
Community content is available under CC-BY-SA unless otherwise noted.