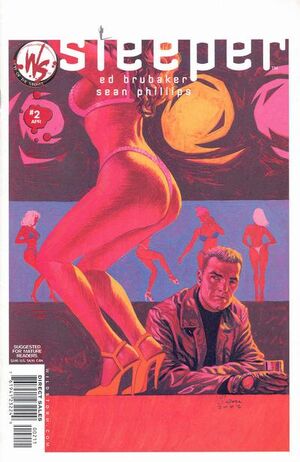 Holden Carver sits alone at a bar. A strange man approaches him calling himself Steeleye. He shows Carver he has the ability to control people as he forces a waitress to agree to meet him later in his room simply by telling her to do so. Carver finds out that Steeleye is Tao's recruiter.

Then we flash forward and see that Steeleye is dead. And it was Carver who killed him. It all happened in a villain hangout called the Third Street Arms. Genocide Jones and a weaselly little man named Triple X Ray accompany Carver. Jones tells Ray to leave before Tao's Blackguards get there. Carver reluctantly lets him go. Tao's Blackguards show up and Carver and Jones are taken and forced to sit in an inquiry before Tao himself.

Steeleye was above Carver and Jones in rank in Tao's organization so killing a superior is not something Tao looks favorably upon. But Carver explains that Steeleye had taken control of Jones and was forcing Jones to molest a little boy while Steeleye watched. Carver busted into the room, causing Steeleye to lose his control on Jones. It was then that Jones pummeled Steeleye with his super strength until Carver had Triple X Ray shoot him so he'd have enough power to stop Jones. Tao tells the two men they can leave and that their fate will be decided later.

When Carver and Jones are on their way out, Jones asks if he thinks Tao believed their story or not. Carver tells him it's a possibility but they'll see what happens.

Carver recalls what really happened. He was with a woman at the Third Street Arms and few doors down from Steeleye. He heard Jones yelling and rushed down to find him beating on Steeleye. He gets Triple X Ray to shoot him so he can stop Jones but Steeleye is already dead. Jones tells him he told Steeleye if he had sex with another kid he was going to kill him. Steeleye did, so Jones did. So, Carver helped come up with the story to keep Tao from killing Jones.

Tao calls Carver to him but tells Carver that he knew all along they were lying. But rather than kill them for it he commends Carver for having the audacity to lie to him face to face. He promotes Carver to a Prodigal, the rank just below Tao and Jones is made the new recruiter to take Steeleyes's place.

Later at a bar, Carver thinks about how lucky they got on this one and he thinks of how proud Lynch would be of him.

Retrieved from "https://heykidscomics.fandom.com/wiki/Sleeper_Vol_1_2?oldid=1457803"
Community content is available under CC-BY-SA unless otherwise noted.