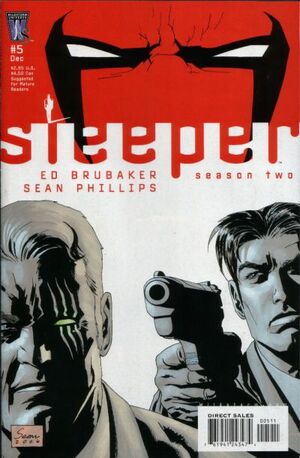 Eight years ago. John Lynch is concerned over the man known as the Tactical Augmented Organism, or Tao, on whether he is dead or alive. He consults through video monitors with Grifter on looking over this as his team, the WildC.A.T.s, had previously killed him. Grifter is skeptical given that he witnessed Tao being vaporized by Majestic and asked his old comrade why he is so concerned about this. Lynch wish he could tell but can't, and request Grifter to look over the area of Tao's supposed death. Once Lynch is out, he then calls Sat-Com control to have satellite imagery over Florida. As the imagery of Florida on his monitors reveals his intended target, Lynch calls for a black ops team in Miami immediately.

Somewhere in Miami, Tao is in a service station's bathroom and have pluck a miniature GPS object from his brain through his nose cavity. Suspicious, Tao then wants to test it out.

The black ops' team leader contact Lynch to inform that he had just discover the GPS signal have dislocated after killing a cat (which they cautiously thought Tao was a shape-shifter) which had the signal inside. Lynch immediately sees this as a trap and tries to warn the team that they are being watched by Tao. The team leader profess that he couldn't see him, and receives no communication from his team members. Lynch urgently warns him to leave now but is too late as the black ops leader's video link lost contact with him. Not too soon, Tao appears on Lynch's screen who then mockingly tells Lynch (who he couldn't see and identify) who is it that is after him.

Five years ago. Lynch briefs his I.O. team about Tao and their mission in tracking him after two previous attempts (including the first in Miami) failed horrifically. Among the people that will be involve in Tao's capture is Agent W, who will act out as bait as he will be a lucrative smuggler that will attract Tao, and assures the team that they must focus on the target as he can take care of himself. One member of the team then question Lynch as to what happen to the second capture attempt. This receives grim faces from both Lynch and Agent W, which the latter explains that Tao was "just laughing at us."

Nine and a half months earlier. Lynch's I.O. team investigate what appears to be Tao's location at the British Library in London. They only discover a murdered painter and find that Tao had left an I.O. file of himself on one of the library's computers. Later, Lynch explains the events to Agent W, revealing that Tao's actions was a sort of calling card to let them know that he could get into I.O.'s systems anytime he wants. John, however, doesn't reveal Tao's true motive and advise W to be very careful.

The next night at Manhattan Harbor, Agent W awaits for pulling his cargo for Tao's arrival, and Lynch's men ready for his capture. Suddenly Lynch lost contact with W and visualization from his position. The plan fell apart as Lynch's team frantically report that Tao is working with post-humans. Lynch races to the site of the gunfire and is subdue by Genocide Jones, who is accompanied by Tao. Lynch demands how he knows about the setup in which Tao shows a captured W by Peter Grimm, whom Tao explains that he prodded W's mind. Tao then has Grimm expose W to his nightmares and Lynch beaten up by Genocide.

After sending Genocide and Grimm away, Tao tells Lynch that after years of wondering why I.O. was interest in him, he had finally discovered it after breaking into I.O.'s computer network and was surprise to discover that Optigen, the lab that created him, was secretly working for I.O. (which also explain for the tracking device planted inside him years ago). But Tao then reveal the real reason that surprised him was a piece of paper authorizing the experiment that created him, which was signed by John Lynch; making him his "dad". Tao then notify Lynch that "what happens next... what [he] will do in this world that [Lynch] think [he] control... [he] just want [Lynch] to know, [he] created [him]" and making everything for him possible.

Two weeks later at the Pentagon. Lynch report his findings on Tao to the Secretary of Defense of one of his motives as a Oedipus-like tendency to bring down his "father" and the rest being unknown. Lynch suggest to the secretary for authorization to "physically augmented" agents to be place undercover within Tao's organization to understand Tao's intentions. But the secretary refuses, given that many people had died in Lynch's vendetta against Tao and wants concrete evidence to support the existence of Tao's organization in order to authorize Lynch's request. Lynch bitterly leaves the secretary's office and bumps into agent Holden Carver. Holden ask him what is wrong in which Lynch replies it is nothing. Lynch then walks with Holden as the two talk down the hallway.

Retrieved from "https://heykidscomics.fandom.com/wiki/Sleeper_Vol_2_5?oldid=1457819"
Community content is available under CC-BY-SA unless otherwise noted.