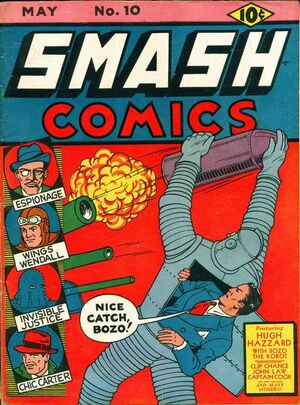 Say ... You're Black X, aren't ya? I follow your adventures in Smash Comics every month!

Appearing in "Mission to Finland"Edit

Synopsis for "Mission to Finland"Edit

Probably circa 1939-Nov, in Washington DC, Russian spies (D-4 and Axel) steal a complete schedule of the arms shipments for Finland, and they murder Mr. Carrel the US Commissioner of Finnish Aid, and they kidnap his young son Tommy Carrel. Black X is in the house as all this happens, and the bad guys get away. Several hours later (incl at least one trainride from WDC to NYC), acting on a clue left by Tommy, aboard the steam liner Doena, disguised as an old man, Black X pursues the spies from New York to Finland. There's no official backing for this mission. A Russian U-boat (caption calls it a "U-boat") intercepts the Doena, directed by a radio call from the Russian spies who are also aboard the Doena, with Tommy. Black X finds their cabin and starts beating up the two Russian spies when the first torpedo hits. Russian agent D-4 grabs Tommy and dives overboard, then swims to the surfaced sub, and away they go to Helsinki. That's twice this guy has escaped from Black X, who now is busy commandeering a motor launch and rescuing survivors.

A week later Black X is in Helsinki, again on Tommy's trail which, Black X deduces, leads north along the Murmansk railroad, to a giant Russian supply base. He gets captured by a Finnish patrol, somewhere north of Lake Ladoga, and talks his way into leading a ski patrol into Russia, to retrieve the schedule and the kid. This patrol encounters and engages a Russian detachment, equipped with a power sled; Black X kiboshes the power sled with a well-rolled snowball. Then this patrol gets to, or near, Murmansk, ahead of the train, massacres a Russian artillery post, and uses (threat of) the captured fieldpiece to stop the train. Black X shoots the Russian spy D-4; it's not clear if D-4 lives or dies, but the schedule is retrieved and Tommy is rescued. Now the Finnish patrol plans to steal this Russian train, and run it backwards, all the way into Finland. TO BE CONTINUED.

Appearing in "Hugh Hazzard and his Iron Man"Edit

Synopsis for "Hugh Hazzard and his Iron Man"Edit

Newspaper headlines announce that the U.S. and Canada have drawn up a secret arms trade alliance. And a radio broadcast announces that a U.S. agent is “speeding the secret arms pact papers to the War Department in Washington.” This intel is acted on by the Darmanian spy, Herr Getzer, who already knows which road this agent will take, and sends out two tough spies (Herman and Fritz) to bring back those plans and that agent, alive. The same broadcast is noted by Hugh Hazzard, America’s #1 crime buster, who also figures out that the U.S. courier will be coming down Taft Highway; it’s the shortest route. Hugh uses his teleradio to pick up a long distance picture of the agent’s car. The teleradio is able to do this because the teleradio has a super-sepericonoscope, enabling Hugh to see and hear what is going on.

A smaller, faster car forces the G-man’s car off the highway and two gunmen confront him on foot; one gets punched in the head while the other one konks out the agent, with a wooden-looking stick. Hazzard observes all this, clambers into his super robot, and flies away to the rescue.

Bozo quickly spots the spy gang’s car, but they don’t spot him, so he follows them rather than attacking right away. The spies drive to a dismal old house in the country, and march the G-man inside. Bozo quietly lands and walks up to the house, finds iron bars across the windows, and yanks them out, not all that quietly. The Iron Man invades the spy hideout and bullets are useless against him. He knocks out one of them, then he interrupts Getzer’s interrogation session with the captured agent, and frees him, then knocks out two more spies, then flies off in pursuit of the fleeing Getzer and his remaining spies. He overtakes them at an airfield, where Getzer is running across the field after a biplane that is taking off.

Bozo catches Getzer and questions him, while snapping a treetrunk in half to show he means business, and doing more strong-robot stunts with a really big rock. Getzer spills his guts. The pilot who just took off has the papers, and by now is halfway across the Atlantic. Bozo knocks Getzer unconscious then flies off in pursuit of the biplane. He catches it, and cows the pilot into handing over the papers. Getzer and his gang all end up under arrest. The next day’s papers announce this, plus “G-Man Claims He Was Aided by a Talking Iron Man … and Proves His Story!”

Retrieved from "https://heykidscomics.fandom.com/wiki/Smash_Comics_Vol_1_10?oldid=1589940"
Community content is available under CC-BY-SA unless otherwise noted.