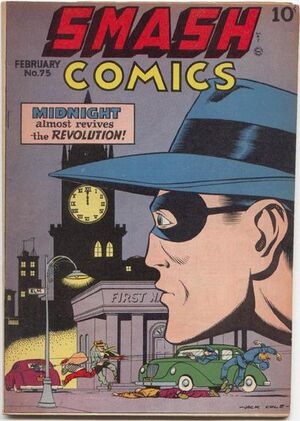 That's funny! He doesn't look all bent and twisted, now!

Looking for an interesting character to interview for his radio show, Dave Clark boasts that he will pay five-thousand bucks to the oldest man who shows up. Natch, a bunch of "old geezers" mob the radio station and fight it out. When the dust settles, old man Simmons is left standing and claims he crossed the Delaware with General Washington.

Once on the air, Simmons explains how he strangled a Redcoat, and he still hates them. Suddenly, someone dressed as a Redcoat soldier busts in and shoots the old man. Dave Clark becomes Midnight and begins to investigate.

He visits a costume shop and is promptly knocked out, kidnapped, and put on trail as a spy, operating against the Redcoats. A guilty verdict echos through the chambers, and as he is about to be hanged, Midnight's pals come to the rescue and take on the "costumed wigs."

After the tussle, it is revealed that "old man Simmons" was really a young hood named McHarg, who wanted to leave the mob. He later strangled a gang member who was sent to get him. When McHarg heard of the radio stunt, he faked being an old man, to win the five G's for getaway money. Taking revenge, the mob rented uniforms and went after McHarg, which led to his death back at the radio station.

Appearing in "Jester: Set the World On Fire"Edit

Synopsis for "Jester: Set the World On Fire"Edit

The Jester investigates a university where they are experimenting with the effects of atomic radiation on the human body. Later, a criminal goes on a crime spree, with his new "glowing heat" powers, but soon he realizes he is disintegrating and completely disappears, into vapors, before the Jester's eyes.

Retrieved from "https://heykidscomics.fandom.com/wiki/Smash_Comics_Vol_1_75?oldid=1380410"
Community content is available under CC-BY-SA unless otherwise noted.