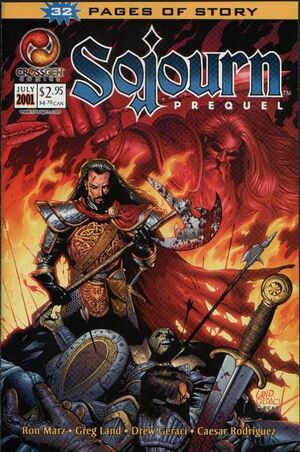 300 years before Sojourn #1, Mordath is torturing the King of Ankhara inside of a fortress in Middleyn, threatening to hurt him if he doesn't tell him the name of the warrior that is pressing him and where he came from. The king tells him that the warrior came from "nowhere" and chased Mordath and his forces into a hole "like rats". Angered by the king's unwillingness to tell him the right answers, Mordath yells at him, asking him again who he is. The king then tells Mordath that the warrior is the person that will destroy him. Furious, Mordath slashes the king across the chest with his sword, and then grabs another knife and kills him.

After killing the king of Ankhara, Mordath heads out of the fortress to see how the war is going. His army is losing, and so he heads out into battle, killing multiple people before encountering Ayden. Mordath learns that Ayden was the warrior he was looking for, and Ayden orders Mordath to surrender. Mordath refuses and attempts to kill Ayden, and so Ayden fires a golden arrow into his chest, killing him. With the five lands of Quin's newfound peace, the people ask that Ayden do something so that a war between the five lands doesn't break out again. Ayden takes his golden arrow from Mordath and splits it into five pieces, sending one to each of the five lands of Quin.

In the present day, two hooded figures enter a room, approaching the corpse of Mordath. One of the figures puts their hands on Mordath, bringing him back to life.

Retrieved from "https://heykidscomics.fandom.com/wiki/Sojourn_Vol_1_0?oldid=1732212"
Community content is available under CC-BY-SA unless otherwise noted.