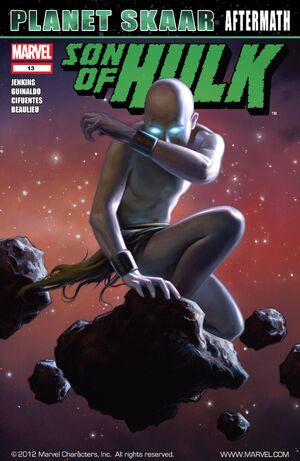 After the cataclysmic events of the last few issues, the Son of Hulk is abandoned, wandering aimless and alone. Can he find his way in the savage, hopeless universe that promises only his destruction? And have any of his allies survived to stand by his side. Join us as new writer Paul Jenkins (WOLVERINE: ORIGIN, INCREDIBLE HULK) takes the reigns for this surprising new storyline!

Retrieved from "https://heykidscomics.fandom.com/wiki/Son_of_Hulk_Vol_1_13?oldid=1732725"
Community content is available under CC-BY-SA unless otherwise noted.