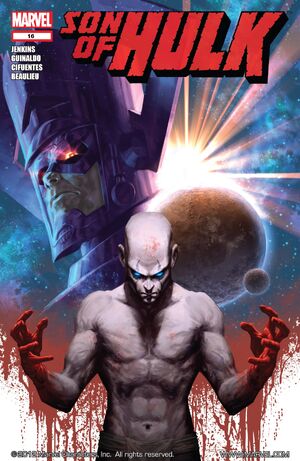 Welcome, Galactus, Devourer of Worlds. Accept this, my gift as your new herald.

Appearing in "Enemy At the Gates"Edit

War besets the hardened survivors of the destroyed planet Sakaar. Only the gamma-fueled rage and ancient Old Power burning through the veins of their leader, the SON OF HULK, keeps them alive. As he tears through the embattled hordes, his ruthless power grows exponentially - but will his quest for revenge cripple the mighty GALACTUS or will his terrifying energies consume him from within?

Retrieved from "https://heykidscomics.fandom.com/wiki/Son_of_Hulk_Vol_1_16?oldid=1453188"
Community content is available under CC-BY-SA unless otherwise noted.