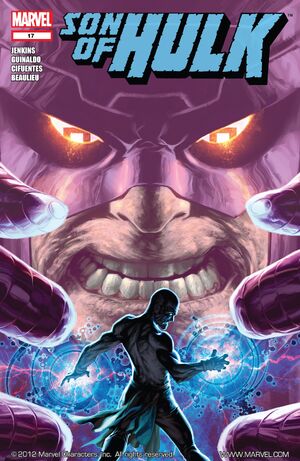 Behold feeble mortal, the terrible power of Hiro-Kala, the Son of Hulk! In this climactic installment, Hiro-Kala rains destruction upon a savage world to satiate his endless lust for revenge. No one is safe. Many will die. The shock waves from Hiro-kala's final battle will be felt across the entire Marvel Universe and not even the mighty GALACTUS can stop him!

Retrieved from "https://heykidscomics.fandom.com/wiki/Son_of_Hulk_Vol_1_17?oldid=1732727"
Community content is available under CC-BY-SA unless otherwise noted.