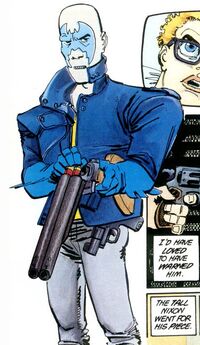 Team Aliases
Sons of the Batman

A vigilante group of youths inspired by Batman. They were made up of several former members of the Mutants after Batman defeated and incapacitated the Mutant Leader and caused the gang to disband. Though initially they were only a little less violent than the Mutants, they gradually matured when Batman took them under his wing and taught them several non-lethal methods. They were given the opportunity to prove themselves when they assisted Batman and Robin in keeping order in Gotham City after a citywide blackout which had resulted in a spike of looting and violence in the city.

Retrieved from "https://heykidscomics.fandom.com/wiki/Sons_of_Batman?oldid=1678481"
Community content is available under CC-BY-SA unless otherwise noted.