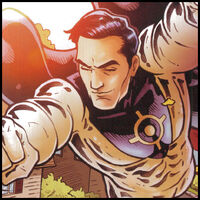 Sovereign began his superhero career with the aid of Hayley Harper as his publicist. Later Sovereign felt he had outgrown Hayley and abandoned her and hooked up with the super villian Hella Heart.

Sovereign seems to be a pastiche of the DC Comics character, Superman.