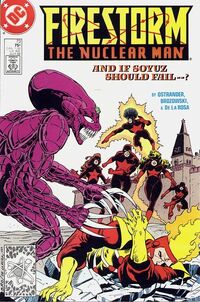 Soyuz was a team of Russian metahuman teens who came together when one of their number, Serafina Arkadin, was prompted to rescue her uncle Mikhail, the second incarnation of Firestorm. They took the name Soyuz - which means "alliance" in Russian - but did not adopt costumes immediately. Serafina dubbed the members herself, and choosing each member's names from Russian mythology.

The members of Soyuz first worked together to rescue Ilya Trepilov, under circumstances that have yet to be revealed. They adopted their costumed identities after rescuing Serafina's uncle's family from the K.G.B.[1][2][3][4] Firebird declared that Soyuz would never harm Russian interests but would instead fight against those people, including those in high places, who sought to misuse their power in order to harm innocent people.

Soyuz has not been seen since Arkadin's involvement with Firestorm ended (nor since the break-up of the Soviet Union).

Retrieved from "https://heykidscomics.fandom.com/wiki/Soyuz?oldid=1679657"
Community content is available under CC-BY-SA unless otherwise noted.