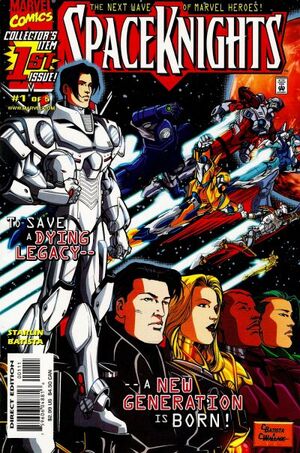 The GMV Tanis comes upon the wreckage of GMV Praxis Six finding one lone survivor, Val. Elsewhere a Galadorian is tortured and forced to utter a vow of service to the Nazgoth. On the training grounds at the Academy of Spaceknights word has spread of the loss of the Praxis and Prime Director Artour's disappearance and apparent death. Brandy Clark, Balin, & Tristan visit the recovering Angel Elite Val in the hospital and hear what happened aboard the Praxis. President Itoes of Trion calls begging Galador to call off the attacks by the Spaceknights only to learn that Galador has NOT sent any to Trion but will now send Peacekeepers to investigate. Lord Baldar calls into question whether the Prime Director's NON-GALADORIAN mistress has the right to do so. Brandy then proclaims it is time for Sir Terminator, Balin, the rightful heir to Artour to present himself to Axadar for judgement that will allow him to ascend to the role of Prime Director himself. Balin proceeds to Axadar but is rejected to the astonishment of all gathered to witness the event. Lord Gaspar informs Brandy of an alliance between Trion and four neighboring planets against Galador. Balin steps forward and with a stirring speech rallies the people in defense of the Empire and prepares for war.

Due to legalities of copyright with Hasbro, the owner of the Rom toy. The name "Rom" is never used in this series and in flashback a nebulous non-descript representation is used for him in place of the well-known armor. When a name is used, he is referred to as Prime Director or Artour.

Retrieved from "https://heykidscomics.fandom.com/wiki/Spaceknights_Vol_1_1?oldid=1453215"
Community content is available under CC-BY-SA unless otherwise noted.