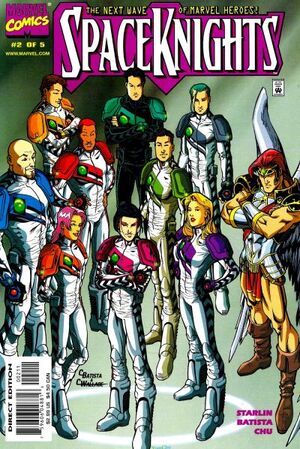 Tristan is talking with his mother Brandy Clark when he is suddenly debilitated by a vision of a Mystical Dire Wraith as Lord Gaspar walks in. As he leaves, he begins contemplating on Axadar, the ultimate in Galadorian technology. He is approached by his older brother Balin who questions whether he is contemplating usurping his position as the presumed heir.

Later aboard a Galadorian Vangaurd starship they enter orbit above the planet Trion. Balin leads them in an aerial insertion to the surface where they quickly quell the rebellion. An angered Balin berates Val in front of the squad shaming him. Back on Galador Gaspar reports back to his Nazgoth master. On Trion, Balin assigns each of his Spaceknights patrol sectors. Tristan (Liberator) is assigned Rand (Lightningbolt) as his wingman. The two of them locate a piece of enemy equipment outside their assigned sector and Tristan disobeys orders to investigate. They recognize the equipment as a Galadorian designed Long-Range Scanning Unit and as Tristan begins to report he has another vision of a sniper and ducks just in time only to see his wingman Rand slain by the shot from a hidden Wraithknight. The Scanning Unit then explodes allowing the enemy to escape. Tristan brings the body of his slain wingman back and is confined to quarters for his disobedience while his fellow Spaceknights view him walking off with contempt, pity, disgust, disappointment, and concern by Rhanla. Their first mission has been a disaster.

Retrieved from "https://heykidscomics.fandom.com/wiki/Spaceknights_Vol_1_2?oldid=1453216"
Community content is available under CC-BY-SA unless otherwise noted.