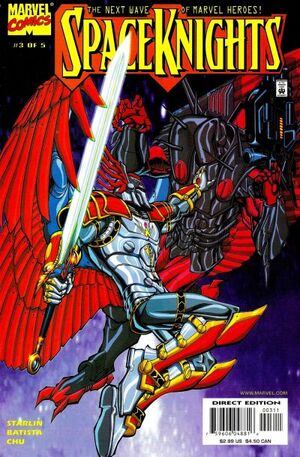 We are BESIEGED! Just as Tristan Predicted

Wounded and demoralized, the Spaceknights assess their first mission on Trion aboard their retrieval ship while their armor undergoes repairs. As Val and Balin discuss their mysterious new enemy, Tristan asserts that the enemy are the Dire Wraiths and has yet another vision. This time he foresees the encampment attacked by Dark Knights and Trion Destroyers which Balin takes as more insane ranting. On Galador, Lord Gaspar and Brandy Clark discuss the political situation and Gaspar secretly places a Gravitational Imploder to destroy Axadar. Back on Trion, the Spaceknights are besieged just as Tristan had seen in his vision. Val and Tristan defy orders to remain in sickbay and join the fight. On the ground below the Trions are confused seeing Spaceknights seemingly fighting WITH and AGAINST their forces. As the battle between Spaceknights and Wraithknights continues, Balin gets through the defenses of one Wraithknight rupturing its power core. Both plummet towards the planet's surface and the unconscious Balin is rescued by Tristan who then blasts a pursuing Wraithknight at close range killing him. As Tristan ascends with his wounded brother, the enemy vanishes and reappear with a dreaded Deathwing. The Spaceknights retreat to the surface and Pulsar forms a force shield around them aided by Firefall which withstands the initial attack from the Deathwing. Vanium creates a jump portal for them to escape before the creature can attack again when another vision incapacitates Tristan.

Retrieved from "https://heykidscomics.fandom.com/wiki/Spaceknights_Vol_1_3?oldid=1453217"
Community content is available under CC-BY-SA unless otherwise noted.