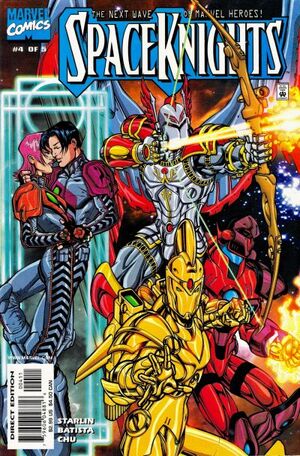 Appearing in "Retreat and Regroup!"Edit

Synopsis for "Retreat and Regroup!"Edit

The Spaceknights retreat through Vanium's portal just before the dreaded Deathwing and Wraithknights attack Pulsar's shielding. They assemble on the ship Retrieval Bravo where Anarra accuses Val of being a coward and Val lunges at her for the insult. The two are restrained by Bron and Darin when Balin commands them to stand down. The ship then seeks to escape their pursuing enemy and regain communications with Galador by proceeding to a nearby Colonial Vanguard Station. The High Command on Galador are reviewing the events surrounding the apparent destruction of Axadar and discussing the direction the Empire will take. Rhanla and Tristan have a quiet moment together aboard the ship while elsewhere the alliance against Galador gathers in deep space and plots to attack the planet Angelica. The battered Spaceknights arrive at the Colonial Vanguard station "Hammer Outpost Delta 7" where they learn of the sabotage of Axadar and the gearing up for war. Balin and Val report via hologram to the Council where Kel questions the accuracy of their report of a Deathwing. They are interrupted by the report of the Alliance assault on Angelica. Secret agents within the Alliance report to their Nazgoth leader where he plots to have Wraithknights attack the Alliance knowing they will be mistaken for Spaceknights. An alarm sounds on Delta 7 and the Vanguard goes to action stations while the Spaceknights stand by having been ordered to stand down. A confrontation ensues between the two factions and the Spaceknights are ordered off the station. Balin chooses to disobey orders and informs his comrades who all volunteer to come along thereby jeopardizing their careers. Darin suggest having Rhanla link all their minds to Tristan to project his awareness of the Dire Wraiths. The Spaceknights suit up and jump to the Angelica sector where the Nazgoth ship is caught off guard and the Spaceknights come face to face with the Wraithknights.