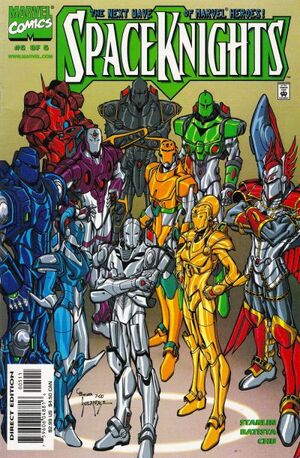 The Spaceknights have come face to face with their enemy, the Wraithknights and their leader the Supreme Wraithknight. Tristan senses that there is a dark link between him and the Deathwing. The two factions battle in the space around the planet Angelica. Val declares the 'Right of the Lanos Challenge' to single combat against the Supreme Wraithknight to regain his honor at failing to protect the Prime Director. Balin viciously cuts through the ranks of the enemy while Bron saves Darin from being slain at the last second. Barely holding their own, the Spaceknights are troubled by their enemy beginning to disengage. Anarra detects a warp gate opening through which comes the Allied Armada. Suddenly a Deathwing materializes and Tarm soars forth to confront the creature. Tarm lashes out and actually hurts the Deathwing causing it to scream in agony. This diverts the Supreme Wraithknights attention just enough to provide Val the opening to slay him. Now without guidance the Deathwing turns upon the nearest targets, the Allied Armada. As the Spaceknights regroup to try to assist the Armada, Axadar miraculously materializes in Tristan's hand. As it bonds with him, Tristan begins to understand what needs to be done. He targets the charging Wraithknights quickly neutralizing them and soars to face the Deathwing while his comrades finish the now defenseless enemy. Tristan uses Axadar to dispatch the Deathwing back to Limbo to the shock of the Nazgoth who immediately withdraws and orders all traces of their involvement expunged and slinks off undetected. Peace is quickly made with the Alliance and as the bonding between Tristan and Axadar strengthens, he tells the team of Lord Gaspar being possessed by a Dire Wraith and planting a Ree Collapser Bomb to implicate the Pah Ree in the conspiracy and how Axadar had escaped destruction by sending itself into subspace before the detonation occurred. Vanium then detects another warp gate opening and the Colonial Vanguard arrives. The Spaceknights return to Galador to sort things out. Balin is called before the Board of Inquiry for disregarding orders where he shoulders complete responsibility for the squadron's unauthorized actions offering to resign his commission. He is awarded a Medal of Honor instead. Gaspar is found by the Angel Elite completely mind-wiped and now just an empty shell. The bodies of the dead Wraithknights on Trion also mysteriously disappear. Later Balin seeks out Tristan at a place their father would often come and they talk. Balin commends Tristan for naming their mother, Brandy Clark as the new Prime Director of Galador. Balin leaves as Rhanla arrives and asks Tristan if that conversation had gone well, to which he replies "Rhanla, my dear, I have NO IDEA..." and they all appear at the celebration of their victory.

Retrieved from "https://heykidscomics.fandom.com/wiki/Spaceknights_Vol_1_5?oldid=1453219"
Community content is available under CC-BY-SA unless otherwise noted.