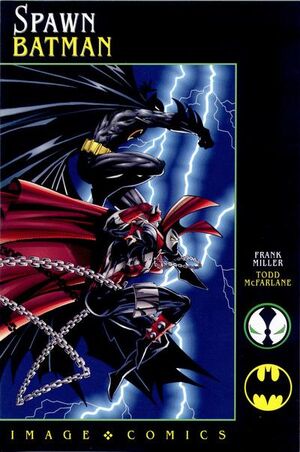 Batman comes to New York City in his search for an arsenal of high-tech weapons and robots that use decapitated human heads as their brains. Antagonistic, confrontational and suspicious of each other, Spawn and Batman engage in violent battles before realizing they are both after the same villain. Grudgingly, they decide to work together. The person they seek has been kidnapping and decapitating the homeless for use in the robots, but that’s only part of the plan: there is also a nuclear arsenal ready to be deployed.

Retrieved from "https://heykidscomics.fandom.com/wiki/Spawn/Batman_Vol_1_1?oldid=1463525"
Community content is available under CC-BY-SA unless otherwise noted.