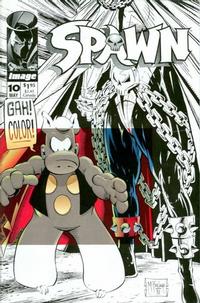 When Spawn tries to examine Angela's abandoned lance, it transports him into a realm beyond his wildest imaginings. While in this strange world, Spawn encounters imprisoned heroes, faces a mockery of Blind Justice in the form of the Violator, and glimpses a dreamlike scenario of happiness for him, Wanda and Cyan.

Retrieved from "https://heykidscomics.fandom.com/wiki/Spawn_Vol_1_10?oldid=1405100"
Community content is available under CC-BY-SA unless otherwise noted.