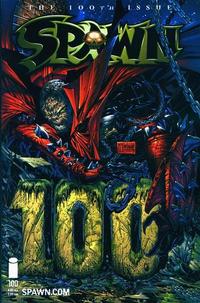 While Wanda lies close to death, Spawn returns to the eighth level of Hell for a final showdown with a weakened Malebolgia. At the height of the conflict, Angela arrives to join in the battle. After mortally wounding Malebolgia and thinking him dead, Spawn and Angela prepare to escape; however, with his last breath, Malebolgia extracts Angela's lance and impales her with it. In a rage, Spawn decapitates Malebolgia with Angela's sword. Carrying Angela's lifeless body, Spawn delivers her to a host of angels who offer him forgiveness and redemption. He refuses this angelic pardon, but the angel who offers it can yet do one favor for Spawn: She appears in Wanda' hospital room and breathes new life into Wanda. Meanwhile, Spawn finally comes to terms with his place in the world.

Retrieved from "https://heykidscomics.fandom.com/wiki/Spawn_Vol_1_100?oldid=1405192"
Community content is available under CC-BY-SA unless otherwise noted.