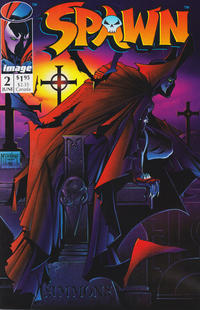 Spawn decides to find Wanda, but fears her reaction to what he's become. With his new powers, he attempts to change his ravaged features, with disappointing results. Exhausted, he collapses, only to be taunted by a foul-mouthed dwarf in clown makeup.

Retrieved from "https://heykidscomics.fandom.com/wiki/Spawn_Vol_1_2?oldid=1405089"
Community content is available under CC-BY-SA unless otherwise noted.